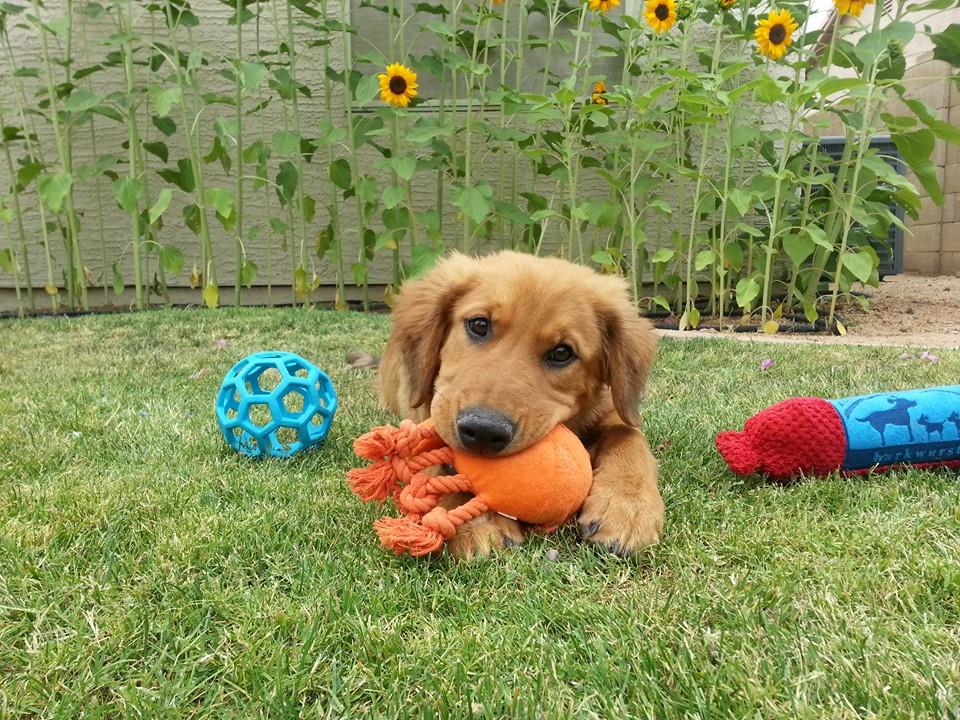 Four years ago, my brother showed up at my parents’ house with a tiny little golden retriever mix who needed a home. Everyone quickly fell in love with the sweet and spunky little pup who loved and licked everyone he encountered. Forever a puppy, he adored his squeaky stuffed animals and shared them with everyone who came to visit. I spoiled him like crazy, and absolutely adored my squeaky little boy. I never thought I could love another dog as much as my beloved childhood dog, Beau. I was wrong.

Two weeks ago, Misha began losing his appetite. The vet prescribed eight medications to stabilize his body. A week ago today, he visited the emergency clinic where they noted abnormalities in his gallbladder and excessively high levels of bilirubin. He visited the vet every day after for subcutaneous fluids to keep him hydrated.

Yesterday, he was checked back into the emergency clinic. His bilirubin levels had risen significantly despite medication, but a $10,000+ gallbladder removal surgery might save him. My parents signed the paperwork, called their financial planner to withdraw retirement funds, and went home with hope in their hearts. We all had hope. A poster in the clinic said to “hug a stuffed animal” and bring it back so you pet can be comforted by your scent, so we did. And I hope that he was.

This morning, my parents received a call that Misha had taken a turn for the worse overnight. He had begun vomiting and a more detailed scan showed this his gallbladder was seeping bile and damaging the surrounding organs. Even with the surgery, there would be a low chance of survival. If he were to survive, he would have a low quality of life for the duration of his time with us.

I have been worried sick about Misha for the last two weeks, and have felt very sad the last few days as his condition has worsened. As we cried, my boyfriend told my family to view it as a “Bonus Day.” Misha is sick and we’re all sad, but don’t focus on that. Instead, imagine Misha had already passed away and, just for today, he is back to share a few more hours with us. This time with him is special, so cherish it.

So I did. I scratched behind his ears, smiled as he licked away my tears, squeaked his favorite toys, took him for a short walk across the yard, and told him what a sweet and wonderful boy he was. I rode along next to him as he drove to the emergency clinic–what would be his final car ride–and watched as he stuck out his nose, smelling all the scents of the world he was about to leave behind.

Energy is neither created nor destroyed, but rather transferred. Though Misha is no longer taking on the form of a sweet, playful puppy that has stolen everyone’s hearts, I know that he’s still here with us–maybe as a sprouting oak seed or a chirping love bird; maybe as a star shining bright on a clear night or a fluffy cloud floating by overhead; or maybe a little bit of each.

It is so incredibly hard to say goodbye after only four short years, but our good boy will be forever in the memories of his family and many, many friends.

By the edge of a woods, at the foot of a hill,
Is a lush, green meadow where time stands still.
Where the friends of man and woman do run,
When their time on earth is over and done.
For here, between this world and the next,
Is a place where each beloved creature finds rest.
On this golden land, they wait and they play,
Till the Rainbow Bridge they cross over one day.
No more do they suffer, in pain or in sadness,
For here they are whole, their lives filled with gladness.
Their limbs are restored, their health renewed,
Their bodies have healed, with strength imbued.
They romp through the grass, without even a care,
Until one day they start, and sniff at the air.
All ears prick forward, eyes dart front and back,
Then all of a sudden, one breaks from the pack.
For just at that instant, their eyes have met;
Together again, both person and pet.
So they run to each other, these friends from long past,
The time of their parting is over at last.
The sadness they felt while they were apart,
Has turned into joy once more in each heart.
They embrace with a love that will last forever,
And then, side-by-side, they cross over… together.